Babywearing (BW): Carrying or holding a baby or young child ( also called Toddler)  by means of wearing a baby carrier.

Baby carrier: An item made exclusively or primarily of fabric, worn on a caregiver’s body and used to carry or hold a baby (or child) perfectly with no support from the caregiver’s arms. In common usage, it may also mean specifically a structured baby carrier (SSC). 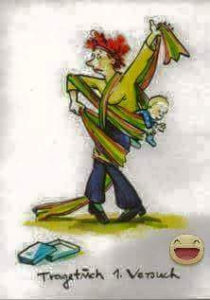 Rebozo: A fringed shawl that is a traditional female garment in Mesoamerican cultures or by Mesoamerican decendents, used for a variety of purposes including labor/childbirth support, goods carrier, and baby carrier. As a baby carrier, it is similar to a short (2 to 3 meters) wrap, usually worn shoulder-to-hip, but fastened by knotting or twisting the ends together.

RingSling (RS): A more-or-less rectangular piece of cloth with two rings sewn to one end, used as a baby carrier by threading the “free” end through the rings and wearing the sling looped around the wearer, generally from shoulder to hip.

Shorty or short wrap: A wrap between less than 4 meters long. Functionally very similar to a long or “regular” wrap but more convenient for wrap methods requiring less cloth, including one-shoulder hip carries, and not usable for other wrap methods that require more cloth.

Shoulder style: The method by which the width of the fabric of a ring sling is gathered or pleated to fit through the rings. The shoulder style of the sling affects the way the sling fits to the wearer’s shoulder.

Soft structured carrier (SSC): A structured carrier which incorporates padding, stitching and/or stiff fabrics, rather than a rigid frame, to provide the structure.Most often refers to a modernized version of a mei tai that has a firmly padded hip/waist belt in place of the waist straps, and well-padded shoulder straps with buckle adjuster/fasteners. Sometimes called a “technical carrier.”

Stretchy (elastic) wrap: A wrap made of knit or otherwise stretchy fabric.

Unpadded ring sling: A ring sling with no padding sewn in.

Woven wrap: A wrap made of woven fabric; used to distinguish from stretchy wraps.

Wrap: A long, more-or-less rectangular piece of cloth used as a baby carrier by means of wrapping the entire cloth around the caregiver’s and baby’s body and tying or otherwise securing the ends, without the use of separate ties or fasteners such as buckles or rings. Sometimes called a “wraparound carrier.” Most often, but not always, refers to a long wrap, 4 meters or more.

Back carry (BC) : Any carry in which the baby is worn on the back of the wearer’s body.

Braid: A method of twisting/tying a wrap for compact storage, which can also help “break in” or soften the fabric. Not used for wearing.

Cradle carry: A carry in which the baby is cradled across the wearer’s body in a reclining or semireclining position. In a one-shoulder carrier, the baby’s head is pointed toward the weight-bearing shoulder.

Froggy position or froggied legs (M position) : A position of the baby’s legs, knees bent upward with feet near the hips like a squatting frog. Generally used for upright carries with a newborn whose legs are too short to straddle the wearer as an older child would do. This is a natural, healthy position for a young infant.

Front carry (FC): Any carry in which the baby is worn on the front of the wearer’s body.

Front facing out (FFO): Any front carry in which the baby faces outward, away from the wearer’s chest.

High back carry: A back carry in which the lower part of the baby’s body is positioned above the level of the wearer’s waist, often requiring that the fabric of the carrier be wrapped around the wearer’s chest or ribcage rather than waist or hips.

Hip carry: Any carry in which the baby is worn at or on the wearer’s hip. Sometimes called a side carry.

Kangaroo: An upright front carry position with a woven short wraps, where baby faces inward on the wearer’s chest and the shoulders are flipped to tighten the top rail.

Knee to Knee (panel width) : Knee-to-knee simply refers to the seat of the carrier extending from the back of baby’s left knee to the back of right knee, fully supporting both thighs. This is ideal for supporting a child’s legs and bottom in a carrier. In a wrap or ring sling, you achieve knee-to-knee support by spreading the fabric as wide as needed. In a mei tai or buckle carrier, the carrier body is a certain width, so it isn’t always possible to have *exactly* knee-to-knee support. In some cases the body can be “cinched” narrower for a smaller baby, and in most cases a toddler will be fine with the seat not being literally knee to knee, as long as it comfortably supports their thighs. If the seat is narrow enough that the child’s legs hang down, with knees below the level of the hips, then you may need a different carrier.

Pocket: In describing a method of using a wrap carrier, a “pocket” is formed when the ends of the carrier are tucked inside the horizontally wrapped portion of the carrier. A “pocket wrap cross carry” is the most common method of using a stretchy wrap. (May also refer to a storage pocket sewn into or on any carrier, most often the tail of a ring sling.)

Reverse cradle carry: A variant of the cradle carry in which the baby’s head is pointed away from the weight-bearing shoulder. Also known as a “nursing carry” although it is not the only position in which a baby may be nursed in a carrier.

Rucksack or ruck: Refers to fastening a baby carrier in a manner similar to a backpack or rucksack, with the fabric or straps coming over the wearer’s shoulders, straight down in the front (rather than crossing on the chest), and then winding to the back. Used with respect to wraps, mei tais and buckle carriers.

Tibetan tie or Tibetan finish: A method of tying either a wrap or an ABC, in a back carry, in which the fabric is wound over the shoulders in a rucksack style, crossed behind the baby and then each end is tucked under the opposite shoulder strap (forming an X on the wearer’s chest) and brought back to the center of the sternum to tie.

Torso carry: A back carry in which the carrier is wrapped around the wearer’s torso and no weight is borne on the wearer’s shoulders. Typical of certain traditional carriers including the podaegi and kanga.

Tummy-to-tummy (T2T): An upright front carry in which the baby faces the wearer; could more accurately be termed a chest-to-chest carry. Also known as a snuggle hold.

Twist: When describing a method of using an Asian-style carrier, refers to twisting the straps around each other, usually behind the baby’s back so as to provide additional security and support for the baby’s weight, but sometimes as an alternative to crossing the straps on the wearer’s chest (in a back carry). Sometimes called a “Vietnamese granny twist” or “traditional twist.” When used in reference to a wrap, may mean a method of tying a rucksack carry that is essentially the same thing as for an ABC (often called a “Lexi twist” after a woman who popularized the method), or may mean to twist a section of the entire carrier around itself so as to form it into a thick, narrow, rope-like shape.

Upright carry or upright hold: Any carry or hold in which the baby is positioned with his or her torso vertical.

Wrap: In describing a method of using a wrap carrier, such as “wrap cross carry”, to “wrap” means to wind the carrier horizontally around the wearer’s torso.

BWCC with CB = back wrap cross carry with a chest belt